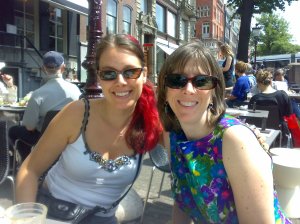 “Celebrate when you do blog or do your weekly review, instead of feeling guilty when you don’t.”

So here I am guys. Hello again!

This Monday I had a fabulous meeting with my friend Tara Rodden Robinson and her husband Douglas from Oregon U.S.
She’s also known as the Productivity Maven and contributes to 2 podcasts @Context and GTD-Virtual Study Group. She is also a writer.

Critics claim that virtual community isn’t worth a can. That is all hot air…
I tell you what happened:

I met my so-called ‘virtual’ friend Tara and her husband on the famous Leidseplein in Amsterdam, when they were here for a lay-over. Instantly we felt like we just had coffee together the other week.
No virtual, just friendship.

We enjoyed our scrumptious lunch on the Keizersgracht, sitting on the terrace next to the canals, having a beer and a coffee, enjoying the sun and a little breeze. I felt as if we could talk on for hours, about our lives, productivity, passion and projects (her new books and my dancing and writing).
— But I ask you guys: who on earth invented jet lag? 🙂 —
After a few hours I brought them to their hotel to sleep – them being severely jet lagged –  and I went home, missing them already.

Did we meet before? Yes and no. We met through commenting on each other’s blogs, via Skype, telephone (she and Augusto Pinaud interviewed me for @Context, a great interview series about people using GTD) and e-mail.

So I’m missing them already, but hey: the world is so much smaller today: Twitter, Skype, I-chat, msn, Facebook, cheap long distance phone calls…
I look forward to the next time I will talk to them, although it might take a while to see them again and hug their necks.

So here’s a shout out to all you people who think Facebook-friends are a facade, the blogging community is fake, forum communities are not real enough:

Think again, times are changing, we are living in an era where we might know a nice Productivity Maven from Oregon better than our neighbor…

The world is real, Internet communities and friends are real if you only let them be.